This annual exhibition will be held at the Mall Galleries from 5 to 17 March 2019. Please see the organisers’ website for more information: https://www.lynnpainterstainersprize.org.uk/

Breach – background to the work

Walls and fences have recurred in my work over many years, but recent political and social trends have made borders and thresholds something of a preoccupation.

Previous work focuses on how marginalized figures adapt to surroundings over which they have little control – how those kept out by barriers of one kind or another respond to their position. My attention has shifted to those exerting the controlling influence, or at least the landscapes that bear the marks of their attempts to enclose territory and exclude others. I often consider the point at which those attempts begin to fail, or at least are exposed as absurd. The brick wall bordering a painstakingly maintained lawn in If I can’t fly (https://hollybrodie.com/project/if-i-cant-fly) is just starting to crack from the force of the tree roots. In A wider moat (https://hollybrodie.com/project/a-wider-moat), painted over the time of the EU Referendum, the defended territory has been diminished to a merely symbolic standing, while the roots of the central oak have begun to rot.

It is only looking back over previous work that I realise how often walls and other boundaries appear alongside trees, and oaks in particular.

I started Breach after a trip to Belgium and France in May 2018, during which I spent time around Ypres, Verdun and the Somme area, and completed it after a second visit to the region in September. The taking and defence of territory during the First World War left still-visible scars across the landscape, as shifting trench lines defined the success or failure of opposing forces. Trees took on a totemic quality on disorientating battlefields. Within the Newfoundland Memorial park at Beaumont-Hamel in France, the site of the Danger Tree is now marked by a replica, its original practical value as a landmark having been superseded by its symbolic significance.

I rarely start a painting with a well-formed conception of how it will be finished.

In the case of A wider moat, the outcome was always to be dependent on the result of the vote. Breach is not based on a particular event and the imagery involves ambiguities I never intended to resolve. The First World War Centenary and current global events were in my mind at the time, but there is no fixed narrative behind the painting. Both the tree and wall have weakened over time, so perhaps there is less a confrontation between the two than a mutual surrender.

While it may appear bleak, the painting focuses on the breaking down of a barrier and considers what might follow.

There is most obviously a hole in the wall, but the inside of the tree trunk has rotted away to a void and the clouds appear to have been scattered by a blast of blue sky. These spaces allude to the possibilities of what lies beyond in both space and time.  I am grateful to artist Peter Ford for directing me to the recent episodes of Radio 4’s Front Row on ‘Walls and Borders in Art’ and Thinking Allowed on ‘Walls’ (available at https://www.bbc.co.uk/programmes/m0002c35 and https://www.bbc.co.uk/programmes/m0002h12). Discussions on historical examples expose the impermanence of even the most robust barriers. Sometimes, their construction is not completed before they degrade or lose relevance.

Behind every wall is the other side.

The concept of the ‘other side’ depends, of course, on viewpoint. A solid barrier blocks not only movement but also sightlines. Those on one side of a divide are left to imagine what lies beyond, favourably or critically. A break in a wall opens up the view in both directions. 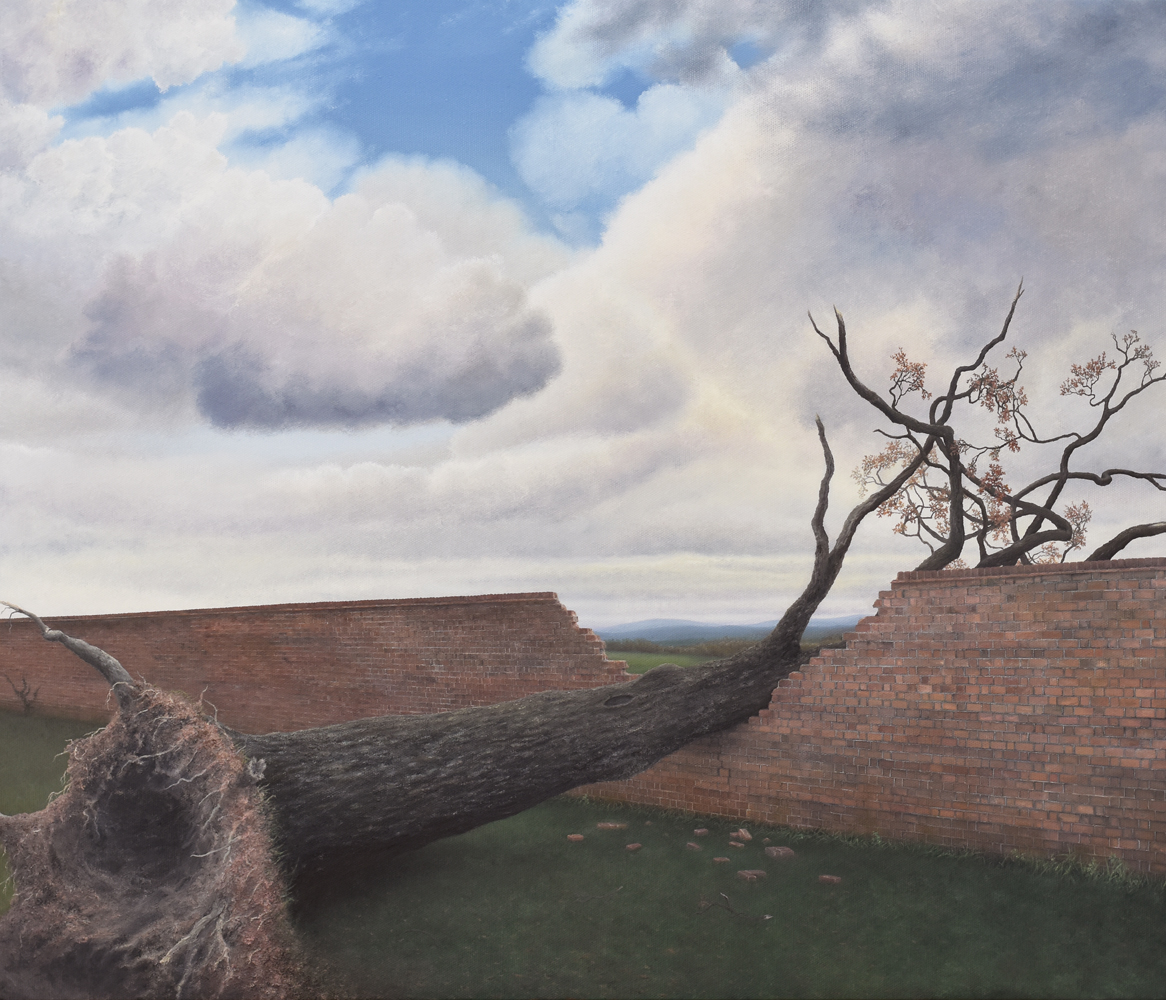